So far, the season’s barely started and so much has already just exploded out of the series. So far, we’ve already learned a lot about where the story has been and where the story is going. Now, you’re probably wondering “How can you possibly know where the story is going to go beyond the next episode?”. Well, first off, stop interrupting me with all these silly questions and just listen; second, at this point, unless you just started watching the series, we all know the Super Sentai series story formula by this point. Everything you need to know generally about the series is usually revealed within the first 3-7 episodes. Within that, we can establish a general pattern for the overall story. Sure, they through in a few twists throughout the series to keep it interesting, but their not going to deviate too far from the formula. So let’s see what we can gather from what we know so far.

Let’s start with the first episode. From that we can gather three things: 1) In the very beginning, all the past sentai lost their powers defending the Earth in the Legendary War, so they probably won’t play an active role in future episodes, at least not until the last few episodes, or one of the movies. 2) From both the intro, and their own revealed background, they opposed Zangyack in the past, and that Zangyack destroyed and colonized their home world, so that means at some point they’re going to willingly and openly fight Zangyack at some point. And 3) They don’t see themselves as heroes, their identity as pirates are first and foremost to them, so they aren’t going to be embracing the idea that they are heroes for a while (even though their name actually means Heroic Rangers). Also, they apparently don’t have their own personal weapons, something that’s been part of the series since Goranger.

Now let’s take a look at the second episode (and some screenshots). First, I actually want to talk about Navi, the robotic parrot that plays two roles. It seems that Navi is both the navigator (duh) and the Go-Kaigers’ personal fortune teller. In the beginning of the episode, he predicted that they would need to find a man wearing black. While they didn’t find him then, he did show up at the end of the episode, but I’ll get to that later. So it seems that they are going to turn to Navi from time to time to get predictions of the future. Now if he could also grow and become a robo/mech then he’d have it made.

But enough about the bird, let’s talk about the part that EVERYONE is talking about. The flashback scene with AkaRed. For those of you who haven’t seen it, basically, the kid from the previews took the ShinkenRed RangerKey from Captain Marvelous, Marvelous went after him, found him, the kid said that he took it because he didn’t want anyone else to be killed like his grandfather was during the Legendary War protecting him, and that caused Marvelous to have a flashback to when he was (I guess) on his world running from Zangyack forces. While he’s trying to fight off the Gomin and get away from them, one of the Surgomin (the ones with the big arms and the blue heads) was about to finish him off when AkaRed jumped in and protected him.

And then he tells Marvelous that their journey together is ending, and that Marvelous needs to continue in his place and find the greatest treasure in the universe, giving him the chest with the Ranger Keys in it. (If you look closely, you can see that the logo on his chest has been changed to the 35th anniversary logo, and I think they also redesigned his belt buckle too)

Afterwards he runs towards the Gomins and fought them in a giant fiery explosion. But there’s something amiss here. First off, take a look at this photo.

Now, just because he’s using a Go-Kaiger weapon may not necessarily mean anything. But he also had the chest and Navi, and in the last shot in this scene, Marvelous is calling out to him in that cheesy dramatic “oh no, he’s just run straight to his doom” sort of way, but you don’t actually hear him, and it almost looks like he’s mouthing the word “Captain”. This makes me wonder if this is AkaRed at all, and not some former captain of the Go-Kaiger crew. I mean, how likely would it be that there could be an AkaRed RangerKey? And if you pay attention to the way Marvelous looks and acts in this scene, he’s not very captian-like. So that begs the question, where did they get the RangerKeys in the first place? Is that AkaRed who brought gave Marvelous the Go-Kaiger powers, or is it someone else who just happened to have the RangerKeys? And if this is someone else, how did he get the RangerKeys, and did he know about Earth and Super Sentai? I guess we’ll have to keep watching and see. While it would be cool, and sem-believable if it was AkaRed, it would also suck, because that means they just killed him off. So, I’m personally going to hope that it’s someone else, so that AkaRed could still be alive on Earth.

(The description below says Shinkenger) And surprisingly, the kid manages to hold his own for a minute, at least against the Gomin. He was fine until he took a swing at Bon Gun (a.k.a. monster-of-the-week), when this happened.

He was also thrown into the building in the background, but he was ok. He also learned a lesson about how serious and dangerous fighting evil was, but who cares about that. The Go-Kaiger learned from this kid how precious the Earth was, but that was going to happen anyway. The real moral of the story is that anyone could use the Go-Kaiger’s powers, a major change from past series where only certain people could be Sentai senshi and use those powers. So this could be something that happens again, though I doubt it will happen twice the same way.

Because of this openness, because of this level of flexibility, that’s what allows them to continually change into other senshi and not be restricted by color or gender. Take these  shots from their fight scene.

Okay, so that’s the same color scheme, but look at these other shots.

(I added the third pic so that you could see which senshi turned into which) After fighting as Dekaranger, they change into Hurricanger and right there and then, we see the first real instance of gender/color swapping revealed before now. Then they finish off Bon Gun by changing into various red senshi from different, nonsequential series. I wish I had pics from the finisher they used on him, it was really cool. They trapped him in a fire vortex using GoseiRed’s and MagiRed’s power, then Go-KaiBlue and Go-KaiPink pounded him as GaoRed and GekiRed respectively, and then Go-KaiRed dealt him a final slash as ShinkenRed, and then he blew up.

So, what we can get from this and the previous episode is that they will go through three different transformations in each episode, not including their initial transformation into Go-Kaiger. And of course, now they’ve brought out Go-KaiOh, so now that’s been brought in, and the formula is being adhered to.

And something tells me that they will be sailing off into the sunset at the end of almost all the episodes.

But, there seems, Go-Kaiger will have another special aspect to the series, because this man popped up at the end of the episode.

For those of you who may or may not know, this is Hashimoto Atsushi, he played Ozu Kai a.k.a. MagiRed in Magiranger and will appear in the next episode. For some reason he’s wearing a black robe with the Magiranger emblem on the chest (he also did something very odd with his hair). Not sure what exactly his role will be, but I’m assuming from the preview that he will give them MagiDragon, as there is a scene with Go-KaiOh and it suddenly has wings and a dragon head on its chest. Here are some pics from it (sorry, no Go-KaiOh).

(In the smaller pics, Go-KaiBlue is Big One and AbareBlack, Go-KaiYellow is GaoWhite and NinjaBlack, and Go-KaiPink is White Swan and Go-onBlack) Those are the three transformations, sorry I don’t have any of Go-KaiOh combined with MagiDragon. I can say that the pattern for this show has been established. I can also say though, that this is going to be a very unpredictable series. You never know what a pirate is going to pull out of his bootie! Long live bad pirate puns!

UPDATE: (3/1/11) Well, new episode, new information. For anyone that saw the third episode, we saw that during the episode, Kai/MagiRed had tested Marvelous and Doc, well Doc more than Marvelous, and that allowed them to fully access the Magiranger powers, including of course MagiDragon. It turns out that a.) Kai had lost, not only his sentai powers, but his ability to use magic, and b.) that when a previous character comes on, they will test Go-Kaiger in some manner, so that they learn about the real source of their particular powers, such as courage for Magiranger, and that when they pass that test, they will have full access to those powers, and may get a mecha/zord that they then can use with Go-KaiOh. In fact, their are going to be a number of appearences of past sentai senshi within the next few episodes. This includes encounters with DekaRed and GekiRed. For now, here are some picks from the most recent episode. 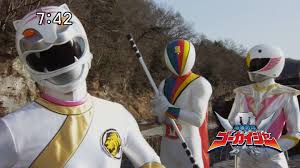 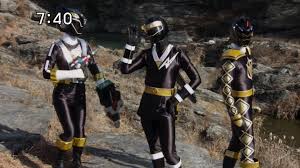 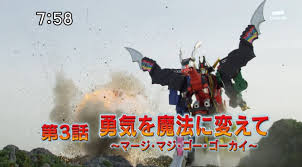 And here are some from episode 4. Looks like it will be a Joe/Go-KaiBlue focused episode. 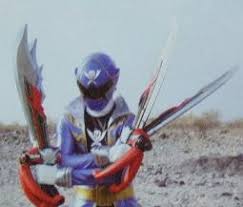 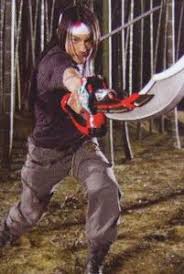