The official combo and medals for KamenRider OOO’s BuraKaWani combo have been revealed today. It showed up along with some new leaked scans of Kamen Rider OOO’s Summer Movie. For those of you who don’t regularly keep up with the blog, the BuraKaWani Combo will be OOO’s first movie-only combo consisting of the Cobra, Kame (Turtle), and Wani (Crocodile) Medals. And apparently, it’s got some sweet moves.

Here we see OOO using BuraKaWani’s special attack, the Crocodile Glide, against what appears to be a Baboon or Howler Monkey Yummy. Yeah, I know it sounds like a cheese dance from the 60’s, but what can you do? That attack is of course associated with the Wani Medal. The Cobra Medal forms a snake that wraps around OOO’s head and can be summoned to attack using BurKaWani’s special weapon, the Burangi (first pic). And of course the Kame Medal gives OOO two inpenetrable shells that can block any attack. Just when you think that the writers and prop designers are about to run out of ideas, they come out with something awesome like this! 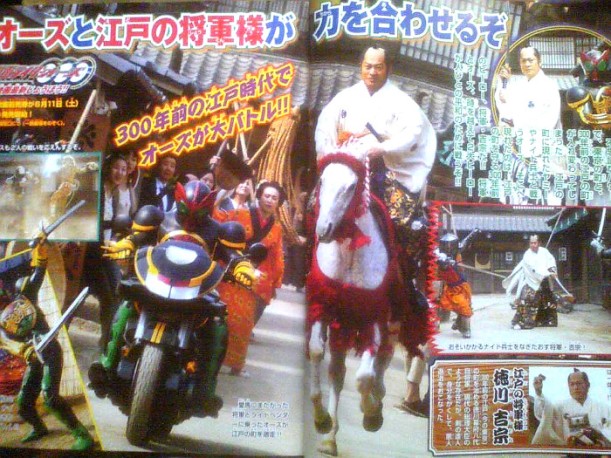 And now we have a bit more insight into the upcoming summer movie. It seems that somehow Modern-Day Tokyo and Edo-Period Edo have merged together across time, and OOO must work with the Shogun of the Edo era in order to fight a Yummy and Medieval Knights(!) that has popped up on the streets of Edo. Can they succeed and restore Tokyo and Edo to their rightful places in history?! I don’t know, but I do know that it will be forever before I’m able to see it! 😦

And we also have some pics from upcoming episodes. 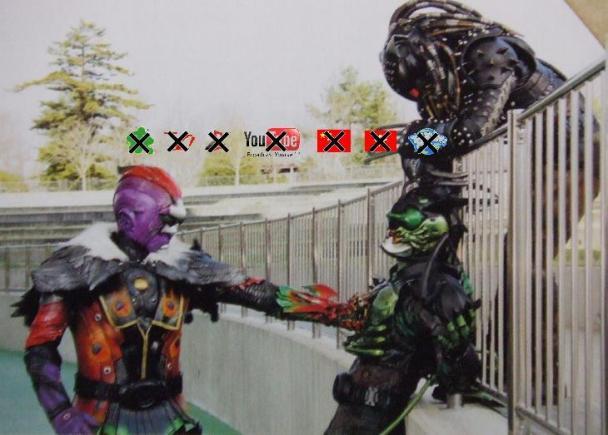 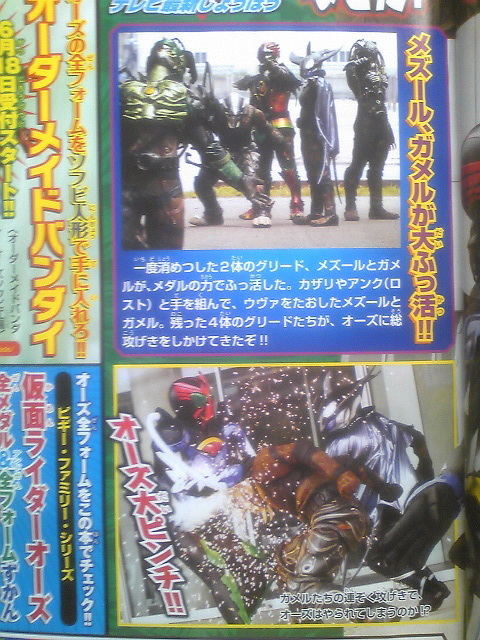 Okay, so it does look like Gamel and Mezool are coming back, and Uva is definitely not going to be around much longer. Geez, you try to revive someone and they reward you by blasting you in the back. What a world. And with this newfound realization that Date has a bullet lodged in his brain, it seems that Gotou might take over as Birth in the upcoming episodes, but not for the reasons that you might think. 😉 Anywat, that’s it for OOO news for the time being, I’m sure more will come out soon.

Yep, looks like Date is siding with Dr. Maki this time. But why on Earth would he decide to do that? Anyway, it also looks like the newly revived Greeed Mezool and Gamel will betray Uva and side with Cazali and Lost Ankh. Man, this storyline just gets more and more exciting.

And there are some new details for the summer movies as well. 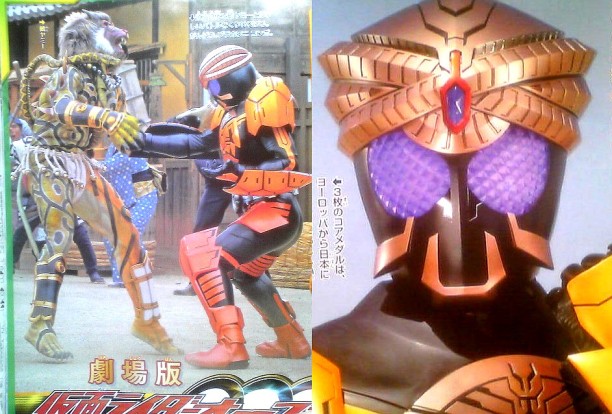 It seems that through the mysterious powers of Gara, the alchemist who created the Medals 800 years ago, OOO is sent back in time to the Edo period in order to fimd and fight this Nue Yummy (official designation). And it seems that BuraKaWani Medals come from a Greeed that rebelled against the other Greeed when they tried to seize power for themselves. And these Medals, just like Ankh’s body, came from Europe, but were sent to Japan. So this begs the question: How do the Greeed speak Japanese so well if they were created in Europe back during Medieval Times? Maybe this movie will help to answer the last of the lingering questions.

UPDATE: (5/26/11) Yeah, wasn’t expecting another update either, thought by now ther would be enough content that I could make another post, but so far only one thing has popped up. But it’s kinda cool.

This is another special release medal for OOO, the Kangaroo Medal. Like the Panda Medal, it is NOT appearing in the show, but it is being released in the August issue of Telebi-kun magazine. Unlike othe specialty Medals, or any of the other medals for that matter, It can go into both the arm slot AND the leg slot of the OOO Driver. In the arm slot, the Medal gives OOO boxing gloves and added punching power, and in the leg slot, OOO gets springs on his legs giving him ability to jump higher and kick stronger. Both forms are available for the Ganbaride game, and each has it’s own finisher. Hmm… I wonder what it would look like with an all-kangaroo Combo…