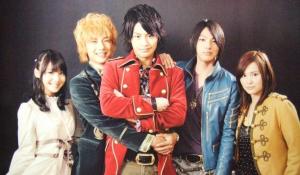 Well, we certainly have some interesting news about Go-Kaiger today, they actually announced the name of their summer movie, even with another not in theaters yet. Also, this picture showed up. People have said stuff about it already, but I won’t say anything here about it, I’ll leave that to you.

Anyway, the movie will be called Kaizoku Sentai Go-Kaiger the Movie: The Flying Ghost Ship, and it will premiere on August 6th, side by side with OOO’s summer movie. There aren’t any details about the plot yet, there probably won’t be anything on it until after the premiere of Go-Kaiger Goseiger Super Sentai 199, but with the title “The Flying Ghost Ship”, it might be possible that our favorite pirates could have a run in with the infamous Flying Dutchman, the ship of the damned captained by the cursed Davy Jones, which would bring in a “Pirates of the Carribean” element to the story. Although they’ll probably have their own spin on it.

If anything else pops up, I’ll let you know.