As you can see, it’s 410x260x220 (can’t tell of it’s in millimeters or centimeters, probably millimeters, since it would be about the size of an actual chest in centimeters), and it comes with a set of 20 RangerKeys. So, assuming it’s in millimeters, it would be accurate in size, shape and decoration to the treasure chest in the show, and it comes with a buttload of booty. Only available at Toys’R’Us for 6000 yen. If you got the money to buy it, then I say go for it. Good luck getting it from Toys’R’Us Japan.

Someone on Twitter recently claimed to have seen a Kamen Rider episode being filmed, most likely for Fouze, and that he also saw Kamen Riders Ichigo and Nigo in this scene, he even sent this TwitPic of Ichigo’s motorcycle, the Cyclone. Take a look:

While he didn’t take any other pictures, he did describe that they were in a fight scene where they were fighting a monster “similar to Momotaros but with a different color”.

No one else has confirmed this (for obvious reasons), but if it’s true, or if it’s something even related to Fouze, then it could prove the rumors of the Occult Club investigating the “Kamen Rider” legend. But as always, this is just a rumor, and it could prove to be untrue. The guy took a pic of just the bike, but not of anything else, which I find a little suspect. But we’ll have to wait and see where this goes.

There are some rumors flying around about PRS that, quite frankly, I find disturbing. Mainly, that Shinkenger‘s Super Mode will NOT be in Power Rangers Samurai. Instead, it will be replaced by this: 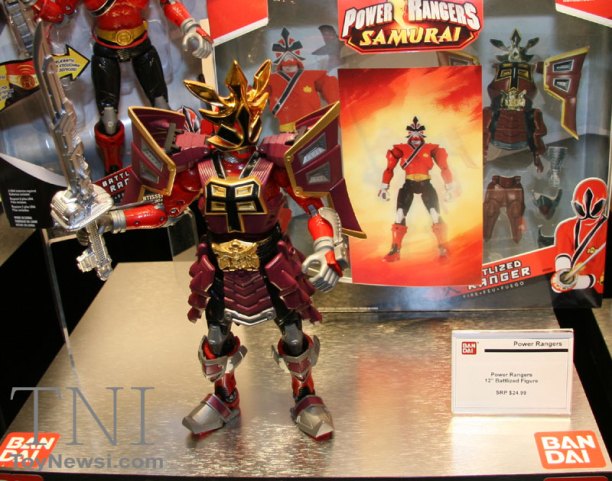 This is their “Battlized Ranger” figure, which is basically an overly-decorated version of their Mega Mode Figures. While some have thought that this looked cool, a bit more samurai-ish, I think that it just looks bulky and unneccesary.

These rumors come out of last week’s new episode of PRS, which was based on ep.23 of Shinkenger, the episode where Genta completed the Inromaru, the device they used to enter into Super Shinkenger Mode. However, in this most recent episode of PRS, Antonio wasn’t able to finish the Black Box, and they replaced a lot of the fight scenes with ShinkenRed in Super Mode with new scenes and a fancy group attack finisher. So this has led many to speculate that instead of using the Shinkenger Super Mode, they will replace and reshoot all of those scenes with this Battlizer, which really is nothing more than a modified version of the Mega Mode.

Personally, I’m just hoping that they’re just putting off introducing the Black Box and the Super Mode, because the show will have a second season and they just don’t want to rush in and introduce it yet. They’ve already skipped almost ten episodes ahead, and the use of the Inromaru was so heavy that it would be impractical to reshoot all of that and replace it with this. I could understand using this during the megazord fight scenes, where the Black Box could upgrade the Mega Mode and morph Jayden into the Shogun Samurai Ranger, mostly because they’ve already reshot those scenes. But outright replacing the Super Mode would just be stupid and unneccesary.

I don’t know what will end up happeneing, but I do know that thet will have more than one season to do it, so who knows where they’ll go with it. Heck, some people think that they will take the Goseiger footage and pull a Zyu2, if not a Zeo, and just use some of what was there to make this stuff, and that controversy started months ago when they first unveiled these toys. I don’t know, we’ll just have to wait and see.