Toy rumors for Fourze have been tossed around left and right, but now we have some real pics from upcoming toy catalogues, where we get to see some new weapons, as well as a sneak peak of Fourze’s different “States”. And we get a special treat we had heard nothing about until now; he has his own AutoVaijin-esque robot! Let’s takeoff!: 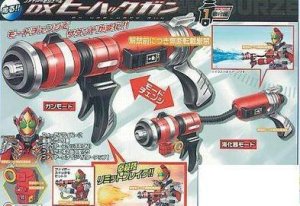 And this is the Module for his Electric State, Billy the Rod (yes, I know that’s a silly name). It looks like you’re typical eletric sword, with several lightning-based attacks. Although, I have to say, his Eletric State makes him look like Bumblebee from Transformers.

Both Modules come with Astro Switches, adding two more to the mix. The Billy the Rod Module (3800 yen) and Electric State figures will be due out in October, while the Hi-Hackgun Module (3300 yen) and Fire State will be out in November.

And finally we have the Power Dicer, the big yellow robot on the side. It can act as it’s own fighter robot, very AutoVaijn like, it can from it’s own four-wheeled vehichle, or it can combine with Fourze’s bike, Machine Masshigler, for what looks like a vertical takeoff platform (the bike is rumored to be able to take off and fly into space). So far, this is what people have been most receptive to, and I can’t really blame them, it looks super cool. Both the Power Dicer and the Machine Masshigler (5800 yen) are expected to come out this November.

Along with these, Fourze’s Base State figure and accesories are due out this August, and (to our misfortune) robotic assistants called Foodroids, which are based on food that’s been taken into space, are also expected to be released along with the other array of toys.

Well, at least we get the big robot. And personally I like the Fire and Electric Modules, it really does look like equipment I’ve seen used by NASA astronauts. Oh well, what do you think?

UPDATE: Just found some more catalogue pics, this time for the FourzeDriver and the “current” set of Astro Switches. Take a look:

The FourzeDriver itself will come out September 3rd for 6500 yen, and wil come with the first four Astro Switches. They will also be selling other Astro Switches in sets of two with a Ganbaride card, and starting in September, they will be releaseing a new set every month for 750 yen. 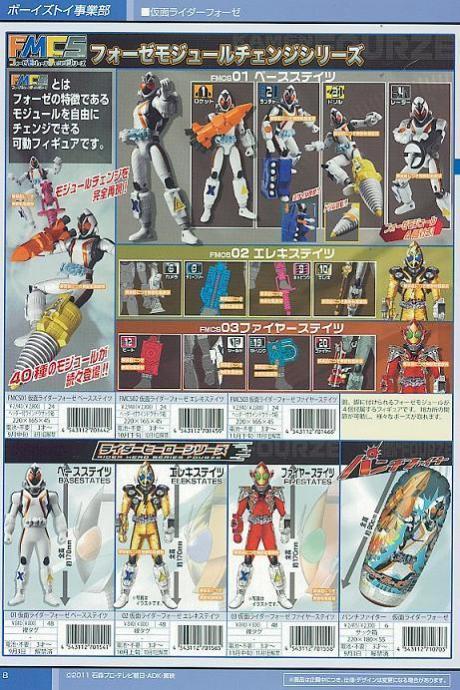 And here we have the Fourze Module Change Series, of FMCS, follwing also in the current trend from W and OOO. First up is the Fourze Base State, with the four main switches. Next is the Fourze Elek State, which comes with four new weapons (Billy the Rod included). And finally we have the Fire State, which comes with it’s own weapons including the Hi-Hack Gun. Each comes out, respectively, in September, October, and November, and each will be 2800 yen.

Then on the bottom of the page, we have the Rider Hero Series figures, in all three States. 800 yen each. And of course, we have your standard, inflatable punching bag, which costs 2300 yen.

UPDATE: So it’s true then…

The Foodroids are real. (sigh) Well, let’s get on with it.

Continuing with the robot-helper-powered-by-the-main-gimmick-thing we’ve been seeing since W, we have the Foodroids, which seem to be based on regular food, not on space food as it’s been rumored. First is Bagameru, translated as “Burger Meal”, which is basically a little hamburger that changes into a “Wall-E”-esque robot. Due out in September. The next one is Potachokin, with is a box of french fries that turns into a robot that seems to match Fourze’s Electric, or Elek State (as other people have called it), and is due out in October. And the third one is Furasheki, a shake cup that changes into a a penguin-looking robot, and spins around. This one’s due out in November. Each comes up to 2500 yen and each comes with an Astro Switch.

Also on this same page is th DX Astro Switch Gaban, which is a special case just for Astro Switches. It can hold up to 10 Switches, and it comes with it’s own Astro Switch as well. So you’ll need four cases in all to carry all 40 Switches. Good luck to ya.

I should mention something very important at this point; it looks like some of the Astro Switches will only be sold along with other toys, other accesories, etc. While they are also selling Astro Switches in sets of two, I’m fairly certain that you can only collect certain Switches by buying a Module or a Foodroid, or some other toy. So, basically, the only way you can collect all of the Astro Switches is to buy all of the toys, all of the whatever that happen to have Astro Switches that come with them. So if that doesn’t show how deviously clever Bandai is at taking your money, I don’t know what else could.

Oh well, as a consolation for your shattered checkbooks, here are a few more scans from the catalogue:

This is the awesome cover for the catalogue. Gotta respect a guy that can fly into space on his own power.

And here’s another copy of the Power Dicer scan, but this time the full page is included, showing two new toys. They appear to be a couple of “Pull-Dash” figures with Fourze performing his Rider Kick, and OOO on the ToRidevendor. Both come out in October for 1600 yen.

And for those of you counting, we’re now up to 20 announced Astro Switches, and the series hasn’t even started yet.