As you know, Kamen Rider Fourze’s official debut was in the recently released movie Kamen Rider OOO THE MOVIE: WONDERFUL, Shogun, and 21 Core Medals, which is currently #1 at the box office along with Kaizoku Sentai Go-Kaiger THE MOVIE: The Flying Ghost Ship. Well, now the OST for the movie has been released, and included with it was the theme song that introduces Kamen Rider Fourze in the team-up scene! Let’s listen in, and get a feel for what the music in the series will sound like:

The song is called “Rocket Rider”, which is rather fitting, wouldn’t you agree?

So we’re clear, this isn’t the official theme song, this is just a sample of the kind of music we’ll hear in the series. And I really hope that his official theme sounds like this. That techno beat really compliments Fourze’s space/astronaut theme. I think I might have to get the album, if for any other reason than to listen to this song over and over again.

The latest commercial for the updated Kamen Rider Battle: Ganbaride 01 has surfaced online, giving us a look at some of it’s newest features, such as the new three-on-three combat system, the functionality of the Astro Switches during gameplay, and the inclusion of two new Rider forms (not related to Fourze). Let’s watch:

Ooh, so many secrets revealed, so little time. First, we can see that the Astro Switches make all kinds of sounds, from when they’re inserted (ROCKET, LAUNCHER, etc.), to when they’re switched (Rocket on, Radar on, etc.), to when your powering up Fourze ( 3… 2… 1…). And from there, the new three-on-three combat system was revealed, with a few new tricks added to the game. And it looks like they’ve added OOO BuraKaWani combo and Agito Shining form to the game.

The commercial was narrated by Hiyama Nobuyuki, who will be narrating Kamen Rider Fourze starting in September. I hope you like his voice, because you’re about to hear it quite often. 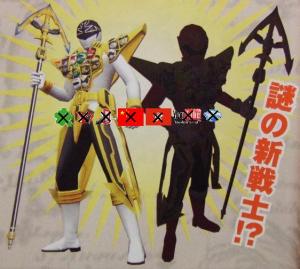 So a few weeks back, we saw got to see Go-KaiRed Gold Mode, at least the DiceOh! version of him (still no confirmation on whether this will happen in the series). But now we have actual video of Go-KaiRed in action, using a special Gold Mode finisher! Take a look:

Not a bad finisher, and Go-KaiSilver came in at the end to take them out, too!