The Bandai.com Power Rangers Samurai Site is now officially up, so check it out, maybe do a little shopping, browse through what they have, because PRS’s real sign of success will ultimately be measured in toy sales. Keep the Power alive by lining Bandai’s pockets.

Disclaimer: There is absolutley no reason for you to actually go and and spend money if you feel its not necessary. I do not, in any way, shape or form, profit from sales of Power Ranger products, so don’t sue me if there happen to be defective products (let’s hope not, but just in case, don’t be a jerk).

Well, its official. Thanks to all of you, the site’s up to 500 visits! And Go-Kaiger hasn’t even premiered yet. lol. So anyway, PARTY TIME! You bring the food, I’ll bring the drinks, and we’ll all meet up on top of Tokyo Tower! (Please note that I will not actually be at Tokyo Tower and that if you go there and find a party going on, it won’t be mine) As always, I’ll try to keep you up-to-date on all things tokusatsu, including Power Rangers Samurai, Kamen Rider OOO (when I remeber to look up stuff for it), and the upcoming Go-Kaiger. My next big celebration will be when we get to 1000 visits (just so I don’t fill my blog with these posts), and for that, we’ll all meet up at Disney World dressed like our favorite Power Ranger, just to rub it in. In fact, if you have a Shinkenger outfit, wear it. See you then!

UPDATE: (2/9/11) Just wanted to say that yesterday another record for this site was broken. There were 43 visits, the highest its ever been. Admittedly, this number has been building up over the past few weeks, but I never expected to grow as quickly as it has. Might not be fast by internet standards, but considering that I have a very specialized blog with very stiff competition, that’s something. Oh no, no exclamation points! Wait there’s one! Now two! Three! OK, I’ll stop there. Ah, who am I kidding! WEEE!!!!!!!!!!!!!!!!!!!!!!!

UPDATE: (2/15/11) Well, this is a little unexpected. Over the weekend, before, during, and after the premiere of Go-Kaiger, I had a major spike in the number of visits to the site, with 70 people on saturday, 118 people on sunday, pushing the total visits well past 800. I also collectively had over 350 people visit the site just last week, and over 500 people have visited the site just since the start of February. So to that, I must say this: Well hello. Where did you come from? So glad you could visit. (Sitting seductivly) I hope you have time to stay, and that you’ll remember to come back soon. I’ll be waiting here, just for you. 😉

The title says it all. Came on after the series finale of Goseiger. Thats 3 Grass Whoppers!!!

BTW if any of you click this link, could you tell Grass Whoppers that I sent you to his vid? Just saying, credit where credit is due.

UPDATE: Grass Whoppers doesn’t owe me a damn thing. The link has been changed, so now it goes to a working vid: http://www.youtube.com/watch?v=NDcDlPk82B0

Yay, I’ve had three hundred visits to my website! And, unless my site stats have been lying to me, I may actually have a few regular visitors. So I’d like to thank the 3 to 5 of you that visit my on a semi-regular basis, and the oodles of you that dont’, but you count just the same. And of course, I wanna thank the only people that ever comment on my posts, the spammers. Seriously, people! Could someone other than some spammer please leave a comment on something, I don’t care if it’s good or bad, as long as it isn’t spam I would be happy, cuz I don’t know if I’m doing anything right or not. I also have a ratings system in place, so whenever you want, you can rate my stuff thumbs up or thumbs down.

Anyway, to get back to what I was saying before that little tangent, yay 300 visits. A lot of exciting stuff around the corner, the premiere of Power Rangers Samurai is coming up, and apparently they’ll have new episodes premiere sundays at noon. Then the following week Kaizoku Sentai Go-Kaiger preimieres, definitly looking forward to waiting until someone has the nerve to put the first episode up on YouTube. And of course, I’ll continue to try and keep you up-to-date about all things toku. And as promised (for those of you who give a damn), I will soon reveal HenshinHead’s form to you (and he is currently working on a new post, so could you do him a favor and read it, because he doesn’t think anyone reads his posts). Until next time!

P.S.: I probably won’t do anything when we get to 400, depending on how long that takes, but expect to party at 500! You bring the snacks, I’ll get the drinks, and we’ll party like Toei just announced that their easing up on subbed videos uploaded onto YouTube!

P.S.S.S: Seriously anyone else who isn’t just spamming my site, I want to hear from you, and only you. I haven’t approved a new comment in over three weeks, and I would like to hear from a real person. You can be anonimous if you want, just someone who isn’t a spammer, please make the first move, don’t wait for someone else to do it.

This is a semi-live recording of the song that took place during the Go-Kaiger press conference Just thought you might be interested. You owe me one, Grass Whoppers!

UPDATE: Here is a clear version of the opening, it’s not the whole song, but at least you can understand more than a few lines, and you can actually hear the music!

Hey there everybody! Itsa me, M.C. here and I’m introducing a new series of blog posts which will run (hopefully) along with the tokusatsu for beginners posts call “Toku’s impact on the real world”. Basically, it will examine how toku has and still is impacting the world that we live in today. It may be as broad and obvious as research into humanoid robots to something so understated and vague that only my twisted brain could connect the pieces. And this new series starts… Right Now!!!

Recently, Sony announced that they had developed the PSP2 NGP, or next generation portable (for Star Trek’s impact on the use of the phrase “next generation”, please visit a blog about Star Trek, otherwise, keep reading). Of all the awesome new features that it comes with (I would like to stress at this point that I am in no way associated with Sony, I just like what they produce), they’ve made a change in how they format the games for it. Instead of the UMD disc or direct download, they now are going to use flash sticks, similar to the kind that are used for memory on devices like digital cameras, or the original PSP.

This is a subtle place where I see the influence of toku on the real world. Your probably wondering, what do you mean? Where could you possibly see any real influence? Well, if you could stop asking so many questions and give me a chance to explain, then I can tell you.

In the world of tokusatsu, there are many instances where some sort of electronic identifier is plugged in to a henshin device, or used in conjunction with some other device, like a weapon or vehicle. Take the side by side example below: 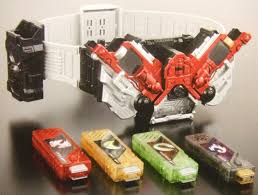 That very tiny white thing on display is an example of the kind of flash memory device they plan on using. Now I know the comparison is far from perfect, but think about it for a second. Before KRW came out, the only thing that devices like flash memories were considered for was memory storage. Perhaps on day, while they were still developing this product, one of the developers came into work on monday and said, “Yesterday, I was watching this new Kamen Rider series with my kids, and I had this great idea for how we could change the game format. Lets put them on some sort of removable storage device, like a USB drive”. Then one of the other developers went “No, we can’t do that, that would too big and cumbersome. I know, lets use those little memory sticks that we sell for the current PSP”. Yes, I doubt that happened that way too, but I’m just saying, it could have happened. For more proof of my insane thesis, I direct your attention to the following changers from various Metal Hero series: 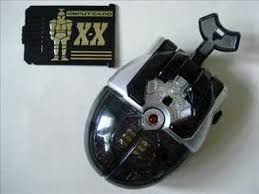 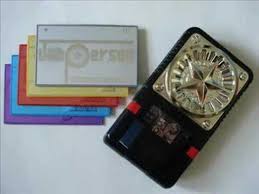 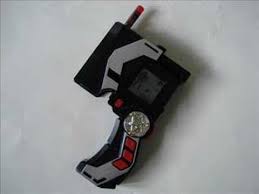 All of these devices rely on reading an “electronic” data card in order to work. And thus, toku’s influence on real world technologies. If you want anymore comparisons, look them up. Power Rangers/Super Sentai is so full of these things, it ridiculous.

Since the sight first went up in late November, its had over 200 visits! And for that, I would like to say, Thank You! Or, to patronize you in the native language of tokusatsu, arrigato gozaimasu! And keep coming back, because there’s a lot more ahead. More news about Go-Kaiger, Power Rangers Samurai, Kamen Rider OOO, and whatever else pops up. Plus very soon, I plan on revealing HenshinHead’s form. It’s gonna be awesome, just wait and see. In the mean time, spread the word, tell a friend, and recommend this site to everyone you know that has a computerized device connected to the internet. I would like to reach 300 sometime within the next month if not much, MUCH sooner. Thank you. 🙂 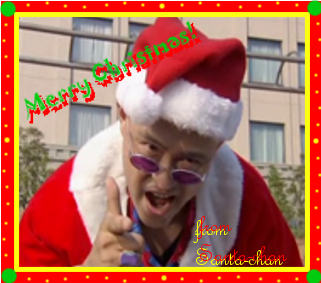 Happy Holidays to Everyone, and Happy New Year!

Go, watch it now. Do it! Stop reading this post already and go! Quickly!

Hello world, its a pleasure to meet you. You may refer to me as HenshinHead. I am a being from an alternate dimension that some have refered to as the Tokuverse. Where I come from, the Earth is litered with tokusatsu-style superheroes, and I am one of them. I am able to enter into this dimension by trading places with my quantum twin who lives here. Together we will report on the tokusatsu of your world, along with harrowing tales from mine. We might not post as often as other bloggers, but our posts will be epic. I must return to my universe now, but I will return very soon. In the mean time, my quantum twin will be here to answer any questions and respond to any comments you may have. Until next time.