The finale to Kamen Rider OOO was quite amazing. The only part of it that most people didn’t like was Ankh’s death at the end of the final fight scene. And his death has left many to ask what they plan on doing for the next Movie Wars now that Ankh was gone and the Core Medals were destroyed. Well, it looks like Ankh might just make a return in the next Movie Wars!

Speculation came after he posted this pic of himself with the Ankh haristyle on his personal blog. While the associated post talked about thanking people for watching the show, some have wondered whether this was a sign that Ankh would be making a return.

They also talked about Eiji’s background a little bit, how he is a politician’s son who uses his mother’s maiden name to avoid being recognized, and how he has an older politician brother (even Shu didn’t know that).

Shu wanted to get into more action stuff himself in the show, but they were never able to add anything like that to the show, Takebe agreed to discuss doing that with him and the production staff for the next Movie Wars. Maybe they’ll talk about reviving Ankh while they’re at it.

We’re officially down to the wire, folks. Only two episodes left in the series, and yet there’s more going on than anyone can keep up with. And now that we’re so close to the end, are we finally going to get the answers to the questions that we’ve been asking since the very beginning? Well, you can judge for youselves from these episode summaries:

When Maki prepares the final act, Ankh intervenes, but because of that his Core Medals are taken away, which is a threat to his existence. The injured and exhausted Eiji is found by Satonaka, she takes him to Kougami Foundation. Eiji develops a desire with power and Kougami prepares a lot of Cell Medals in front of him.

On the other hand, Hina tells Chiyoko about the relationship between Eiji, Ankh and Shingo. Chiyoko accepts the facts and encourages Hina. And because of that Hina decides to…?

Episode 48 – Kamen Rider OOO’s Final Episode
Uva regains all 9 of his Core Medals and is complete, the process of ending the world is starting. Maki wants Uva to go berserk and keeps on inserting Core Medals inside him. Uva gets annoyed and escape. Birth fights with the Complete Uva.

Eiji without any Medals, asks Kougami for help. Kougami hands Eiji the power to save the world, the King’s Core Medals (王が持っていたコアメダル). OOO appears in front of Birth, together with Ankh, they fight Uva. But Ankh does not tell the others that his Core Medals are slowly breaking…

So, what does all of this mean? Well, to sum it up as best as I can, 1.) we’ll finally learn secrets about the original OOO, the King from 800 years ago, 2.) somewhere around the end of the next episode, Maki will strip Eiji of all his Core Medals, including the PuToTyra cores, possibly reverting him back to a human, 3.) Uva will be the final “boss” in the series, though no word on what will happen to Maki just yet, and 4.) Ankh will fight alongside OOO/Eiji in the end, but it might cost him his life…

As for the King’s Core Medals, I don’t know what they are, there hasn’t been anything said about them, no images leaked showing what they could be, so we’ll just have to watch to find out.

And despite the direction the story seems to be taking, I really hope that it doesn’t end on a cliffhanger that won’t be resolved until the OOOxFourze Movie!

Here is, without a doubt, one of the biggest things to come out of Ep.46, the debut of both Eiji Greeed and Complete Ankh! And their battle against each other!! You’ve gotta see this!:

So where on earth does the story go from here?! Looks like we have to tune in to find out!

Whoa, we just took a major left turn. It looks like Eiji will become a Greeed! (Hmm, doesn’t that plot line sound familiar?) 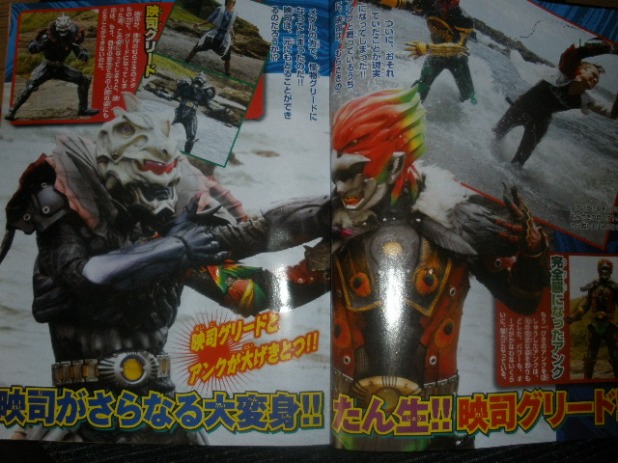 At the moment, it looks like this transformation, influenced by the five purple core medals in his body, may be permanent. While he can take on a human form, he may not be able to completely revert back into a human. 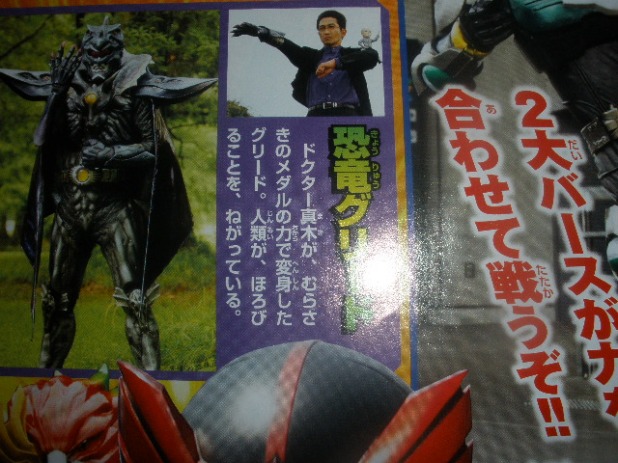 And while both Eiji and Dr. Maki are dinosaur-themed Greeeds, only Maki has been label as the “Dinosaur Greeed”. Eiji is being called the “Eiji Greeed”.

And to make matters worse, Ankh has found a way to fully revive! You can see him here, with his face completed, and the place in his “belt” is now yellow.

But it’s not all bad news, as we get to see this: 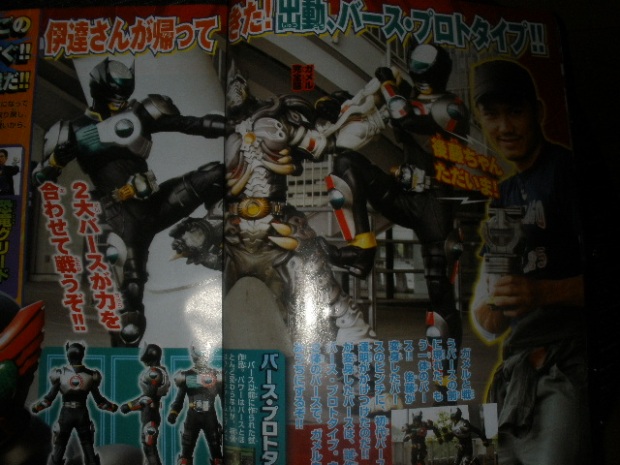 That’s right, Date’s back! And he’ll be fighting alongside Gotou in the Prototype Birth suit, distinguishable by the red markings across the little gashapon capsules. Apparently, the prototype suit only has the Crane arm and the Breast Cannon, although it matches the Birth suit in strength. And it looks like that’s enough to take on a completely revived Gamel.

Looks like someone blew the costume budget before they created the prototype Birth….

And I’d like to leave you with this. It’s TaToBa with purple eyes. The effects of the purple core medals have run that far, that deep. Will Eiji ever be able to revert back to human form? Will he be like past Riders, becoming the very monster he fought against, only to fall at the end when all is said and done? Or, will he find a way to undo what has happened? And most important of all, does all of this mean that the series will end on a cliffhanger? Check back soon to find out!

So, Ankh was absorbed by Lost Ankh at the end of this most recent episode, leaving Eiji with only the purple core medals to fight with. Will Eiji be force to rely on this uncontrollable power, or did Ankh have one last trick up his sleeve? Read on to find out:

Episode 41: Brother and Sister, the Rescue, and Eiji Leaves
Lost Ankh, who finally absorbed Ankh, feels like he’s complete. But then he notices that something is missing. He realizes that he needs something from Hina in order to be complete. Lost Ankh tries to attack Hina, but is stopped by Eiji. Eiji runs away with Hina and realizes that she has a hawk medal. Lost Ankh eventually catches up, Eiji has no other choice than to use the purple Core Medals. While they are fighting, Lost Ankh’s right arm stops moving.

Episode 42: N/A – July 17
After Ankh was absorbed, Shingo regained consciousness. Eiji and Hina don’t want Shingo to be involved in all the fighting, so they leave him at Cous Cousier. Maki confronts Eiji and demands the purple Core Medals. Eiji refuses to hand them over. But then Maki tells Eiji something important.

Episode 43: N/A – July 24
A couple is sitting at a park and a white Yummy is born out of the male. The Yummy eventually grows into the Vulture Yummy. The Vulture Yummy starts to immediately go after his targets.

Episode 44: N/A – July 31
Gotou and Hina are worried about Eiji, who’s slowly growing into a Greeed, so they ask Kougami for help. Kougami takes them to a certain place of his foundation.

Well, this series certainly is full of surprises! So, is Ankh lost for good? Can Eiji be rid of the purple cores before he changes into a Greeed? Do they have enough cores to avoid using the PuToTyrano combo?

Okay, then we have a new crop of pics for OOO, mostly from the upcoming summer movie, but we also have some from the next couple of episodes too. Let’s get this party started!: 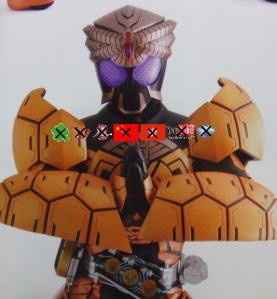 Here we have some good pics of BuraKaWani, very cool. Very good detail on all three sections of his body.

This is, without a doubt, one of the most epic pics I’ve found from this movie. 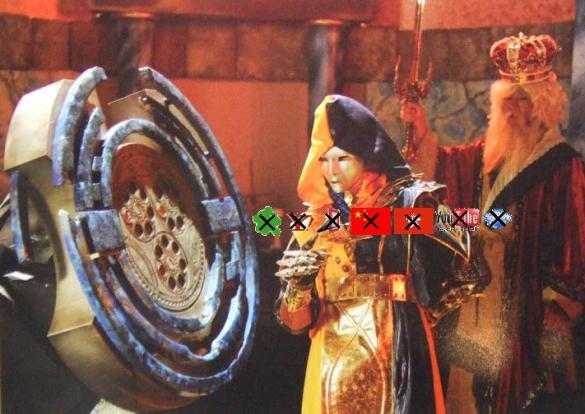 This is Gara with the old king. The king was so afraid of Gara and the orange cores, that he had both sealed away. No word on whether or not this is the king mentioned in Ep.30, the original OOO that went berserk after absorbing the powers from all the medals.

Gara was revived by Kougami, and now it’s up to OOO and the other to defeat her!

This is suppose to be Gara’s monster form. She claims to be “the true OOO”, and won’t rest until she has all the medals and becomes “king of the world”. 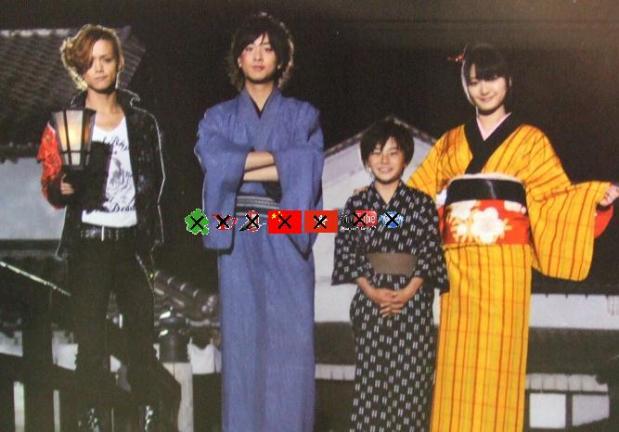 Is it just me, or does Eiji look like another samurai we know? (Hint: Take-Chan!, or if you prefer, TONO!) It also appears that the Coussier is having an Edo fair during all of this, so they already had the kimonos to change into and transition into the Edo period part. 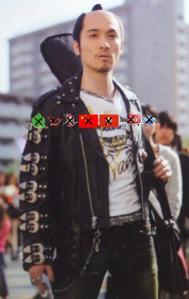 Okay, I keep seeing this guy, but I have no clue who he’s suppose to be. Any thoughts?

The Nue Yummy manages to defeat OOO while he was protecting Hina. That’s when Yoshimune appears and tell Eiji to use the Core medals he has, thus giving OOO, and us, this: 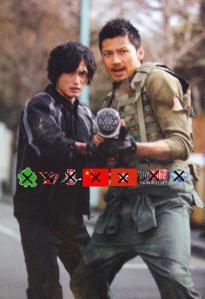 Everything past this point is for the show: 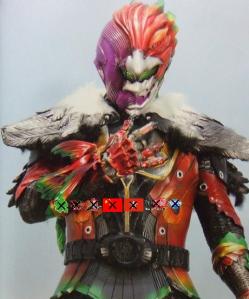 Aww, is someone not a happy camper? 😛

Looks like the Cous Coussier is being forcefully shut down in the next episode, but even that can’t bring down Chiyoko’s spirit!

It’s also looking like Lost Ankh will absorb Ankh (but only for a couple of episodes), and that the purple cores in Eiji are starting to take their toll. One twist after another with this show, and they only have ten episodes left!

Anyway, that’s it for now, if I find out anything else, I’ll let you know!