Well, here’s Fourze Ep.3 subbed, featuring the new #9 Hopping Astro Switch, the Queen Festival, and the sneaky Chameleon Zodiart, along with another BIG surprise. Check it out!:

So, what’s the Chameleon Zodairts real aim? Why get rid of Miu’s competition just to humiliate her during the competition? And why did the Scorpio Zodiart step in during that first encounter. I guess we’ll just have to wait til next week to find out!

Episode 2 is out of the way, now let’s check out the newest episode summaries for episodes 3 and 4, a.k.a. the Queen Festival arc:

Episode 3: Queen Election – 09/18
After setting up the Kamen Rider Club, Kengo is adjusting the Astro Switches so they currently cannot be used. Gentaro decides to test the adjusted switch — #9 Hopping. Yuki is worried but Gentaro ignores her. Fourze’s left leg turns into a pogo stick, he stepped out very excitedly, but to his surprise he cannot control it and crashes to the walls and the ceiling.

Gentaro walks dizzily to the classroom, he notices Miu’s poster on the wall… At the time, the Queen’s Festival is held at school. Everyone thinks that Miu will be chosen. However, Gentaro offers that if she fails they’ll have to become friends.

Episode 4: N/A – 09/25
Every year the Amanogawa High School has a poll to choose the most beautiful girl in the school, and Miu has taken it every year. As the most thrilling moment comes, the Chameleon Zodiart attacks Miu.

For those of you wondering, yes, there is a chameleon constellation. And Fourze is turning out to be less of a Swiss Army knife and more like Inspector Gadget with an space slant. 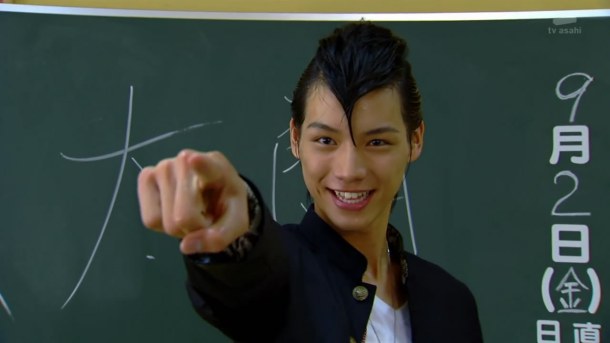 Fourze is just days away, and as we get closer to the start, we’re starting to get more details about the first story arc in the series, episodes 3 and 4, which are all about Amonagawa High School’s “Queen Festival”, and about the Queen of Amonagawa, Kazashiro Miu.

Episode 03 – N/A – 9/18
Writer: Kazuki Nakashima, Director: Koichi Sakamoto
The school event, “Queen Festival” begins, however the contestants are being attacked one by one by something invisible.

Sorry, there aren’t a lot of details, since the series hasn’t even started yet. If I find out anything more on upcoming episodes of Fourze, or anything on Fourze in general, I’ll be sure to let you know.