We’re down to the final three! It’s Kaizoku Sentai Go-Kaiger Ep.49 RAW!! And this time, withe the help of their five new Grand Powers, they’re able to find the Greatest Treasure in the Universe! But in order to fully activate it, they need to give it all 34 Grand Powers!! And to top that off, they end up in an all-out battle with Insarn, which preludes to another Legend War!!! What will they do now?! And how many exclamation points can I fit into a single paragraph?!!!!!! 15, to be exact. Now watch the episode below:

The start of a new war? A bunch of returning actors?! A Zyuranger tribute saved for the next-to-last episode?!! Speaking on behalf of that last point, it’s about damn time!

And I thought September was going to be a busy month. 😛 Anyway, a list of possible guests and guest appearances have popped up, and if confirmed to be true, than it looks like every episode after these next couple are going to be tribute episodes. Here’s the list so far:

Wow, that’s basically straight tribute episodes up to the final week of December. Let’s see if this turns out to be true.

Hey, I just wanted to mention a few things that I recently added to henshinGARB, the Greatest Toku Shop EVER, and official henshinhead merchandise shop. This time we have some new products inspired by Mirai Sentai Timeranger, or Power Rangers Time Force if you’d prefer Take a look:

Here we have the whole Timeranger/Time Force team, including TimeFire/Quantum Ranger. Their personal insignias have been “airburshed” onto these tees, giving it that personalized, homemade feel. And you gotta admit, it looks cool, right? They’re available in the colors shown above, and in mulitple sizes. The men’s standard weight tees (red, blue, green, fire/quantum) are available for only $12.00, the men’s heavyweight tee (yellow) is $16.00, and the two women’s slimfit AA tees (yellow and pink) are only $19.00.

Now you can have AkaRed’s head printed on your chest where ever you go! These sleak red tees bear the resemblence of the cult favorite warrior, and are available for only $12.oo (multiple sizes, same price for men’s and women’s).

Here we have the Oretachi Mega tees, inspired by Megaranger/PRiS, with the five-colored band running across the chest. They are available in the colors seen here, and on the bands. Available in multiple sizes. Men’s tees only $12.00, women’s slimfit AA tees only $19.00

And finally, we have the SunVulcan Tees, guess where these designs come from. Available in the colors seen here, and in multiple sizes, the men’s tees are $16.00, and the women’s slimfit AA tees are only $19.00. Currently, we also have the SunVulcan logo available in button form for only $5 for a pack of five.

And you can only find these amazing products at henshinGARB!

Since this year is considered the 35th anniversary of Super Sentai, we tend to look back at all the past seasons of the series. And while I was doing that, I noticed an unusual, and somewhat unnoticed, trend with Sentai Anniversary Series. Until now with Go-Kaiger, almost every Anniversary Sentai has included a member that wore black. Just take a look back at the last major anniversary. 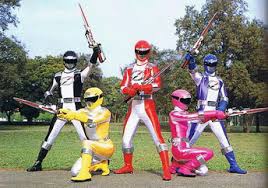 The last anniversary series was GoGo Sentai Boukenger, whose team included BoukenBlack as a member of the core team. Now I know that a single instance isn’t enough to build a whole case, so let’s go back another five years. 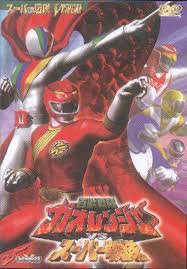 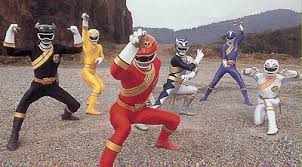 The 25th Anniversary series, Hyakujyuu Sentai Gaoranger, also featured a black senshi, GaoBlack, and was the first to have a Vs. Super Sentai special (Well, the first to have that as an official title). Now, mathematically speaking, if the usual pattern for teams by season was to alternate between green and black, then either this series should have included a green senshi, or Boukenger should have had a green senshi with Go-Kaiger having a black senshi. But since they have played around with how they make the teams, you know, with three member core teams and repeating color schemes, this has thrown this pattern off. But these aren’t the only two examples. 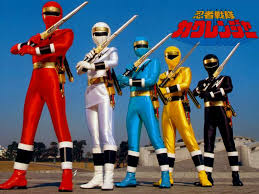 Ninja Sentai Kakuranger was considered the 15th Anniversary before they readjusted for the gap year between JAKQ and Battle Fever J, and of course includes NinjaBlack, who was also the first actual American to play in a Super Sentai series. Before then, the only Americans in the series were just characters, not actual actors. It also had the Super Sentai World special that premiered a week before the start of the series. But the main thing here is that this series also had a black senshi. But this isn’t the last example. 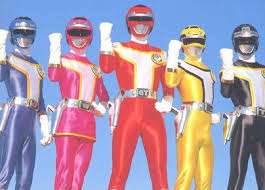 Kousoku Sentai Turboranger is the 10th Anniversary series, and included BlackTurbo. This series had a special called Super Sentai Tamashii that also premiered a week before the actual series, and included all the previous sentais. Now this was considered the first official anniversary series. While they have celebrated the series anniversary every five years since this series, they did not include what is the fifth anniversary, Sun Vulcan. However, since including that series would go against my premise, I won’t cover them.

I will, however, go over the one exemption to my premise, the one other Anniversary Series that includes a green senshi. 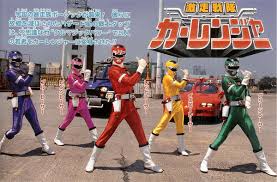 This, of course, is Gekisou Sentai Carranger (or should I say CAAAARRRR-RREEENJAA!), which is considered the 20th Anniversary series, after the adjustment for the gap year, and features GreenRacer, which makes it the first official Anniversary series to have a green senshi, beating Go-Kaiger by 15 years (holy crap, has it been that long?!).

But what we still have to wonder is, why is their such an affinity for black senshi in these Anniversary Series? Is it simply a coincidence, or do they purposely choose that team setup again and again. Well, it’s probably a mix between coincidence and aesthetics. After all, why do any of the teams have the color scheme that they do have? When the creators of the series start to work on a new series, they probably already have certain themes in mind, and they probably go through a few uniform designs before they decide what looks and works best for that series. There isn’t any written rule that they necessarily have to use alternate color schemes from season to season, otherwise there wouldn’t be teams with both on them, or teams with neither of them. The only thing that we can really be sure is that, at least as far as Anniversary seasons are concerned, their will be five of them, as a way to pay homage to the original Goranger.

Now I know what your thinking from the title, “Holy Crap! What kind of show are they making?”, but calm down, it’s not that kind of gender reassignment. Although now that you mention it, who are you to judge?! But seriously, no, it’s not that at all. This has more to do with the speculation over how many members Go-Kaiger will end up with. You see, when the rumors about Go-Kaiger started popping up, a good deal of them dealt with the possibility that there may be more than one senshi with the same color, like say, a male and female yellow, or a male and female blue. Other rumors included the possibility that there would be a number of extra senshi that would have a wide spectrum of colors in order to fill the color gap, such as the Go-KaiBlack rumors. But, according to recently released photos and screenshots, it seems that neither of these rumors were ever true.

There are two main sources that put the final nails in the coffin for these rumors. The first is the released footage from the Goseiger Vs. Shinkenger movie, that shows the entire squadron changing into red senshi from the previous five seasons. That’s a huge indicator that show that clearly any one of them can turn into any previous senshi. The second source comes from a magazine (publication unknown to myself)that has both a two-page spread where each of the senshi are surround by all the previous senshi they will change into in the show AND a foldout poster that feature them in the center and images of the team changed into previous teams organized around the poster. And let me put it this way, there are a number of them who are wearing skirts now that weren’t before, and there are even a couple missing skirts.

Well, here’s the skinny of how the teams will be worked out. Basically, all past yellow senshi are now female, all past blue are male, and Go-KaiGreen will mostly be changing back-and-forth between green and black. Now it’s not completely strict to that. Go-KaiPink, for example, will change into Black Bison from Liveman, KuwagataRaijer, GekiChopper, and Go-OnBlack. Go-KaiYellow will also take the role of Big One from JAKQ, and ChangeMermaid. And Go-KaiGreen will also change into KabutoRaijer. And in two cases the full team isn’t there. SunVulcan only has three senshi, and Abaranger doesn’t include AbareKiller. The only real consistency is that, at least on that poster, red is always male. But considering the possibility that any of them could be any one of those past senshi, who knows what could happen!

But, at the end of the day, who can really say for certain what will happen, and who cares? As long as they do a decent job with it, and they’re able to get past the problems that have shown up in other series that have done the same thing already (although I would like to say that I liked Kamen Rider Decade, even if some people absolutely hated it). And besides, when they’re not past senshi, they’re pirates, and pirates are always cool, mostly.