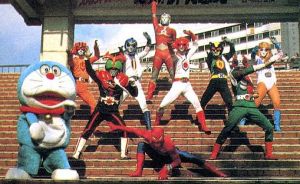 Well, look whose finally catching up. Toei now has it’s own official YouTube channel, where they’ve been uploading random videos from all of your favorite tokusatsu tv shows, from Kamen Rider to Super Sentai to Metal Heroes, and thensome! And since they’re the ones uploading this content, it’s all “legal”, so no chance of them being removed anytime soon.

So far, this service is really only being aimed towards their Japanese audience, so every video is just in Japanese RAW, but at least ou can see them. The account has also been uploading Super Sentai and Kamen Rider movies, as well as Kamen Rider Net Movies, but so far those videos have only been available in Japan. So anyone outside of Japan is going to have to rely on other people uploading these videos onto YouTube. It sucks, I know, but at least you can watch episodes of other toku shows that never really made it onto YouTube before.

Here’s the link to their official YouTube channel: http://www.youtube.com/user/TOEIcojp

It’s not certain how long this will last, so go ahead and check this out now. Hopefully, they’ll expand this once they realize how many people outside of Japan are interested.